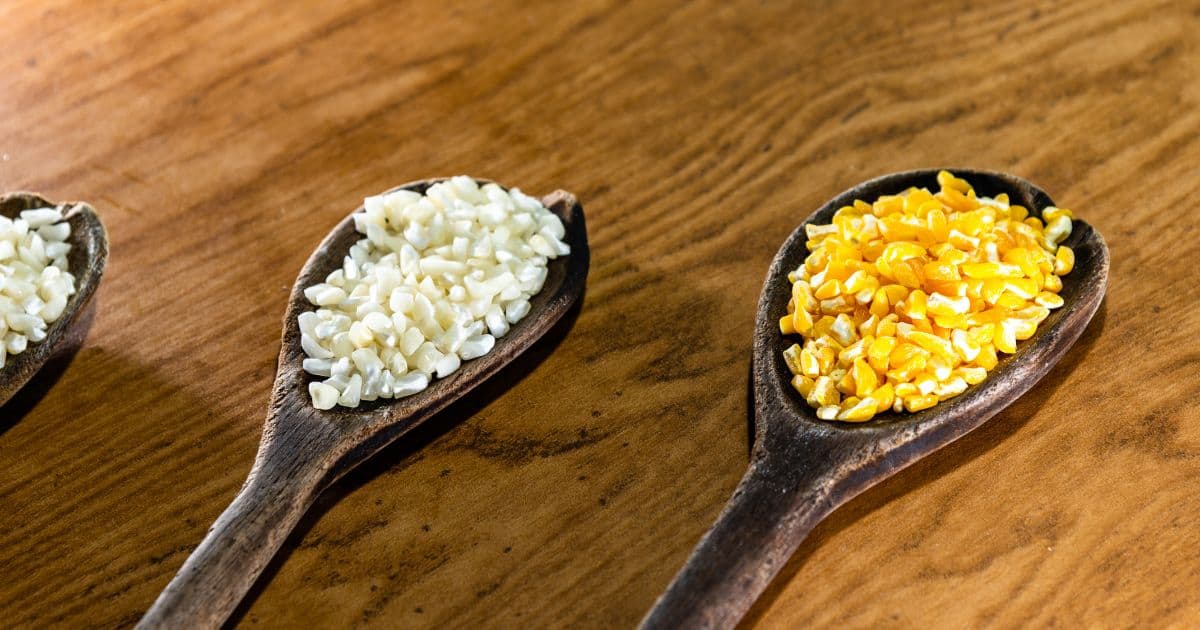 My love for Hominy Corn porridge is real! Who can resist this most delicious of Jamaican porridges, from the creamy texture studded with little chewy pieces of corn to the depth of flavor from the cinnamon, nutmeg, vanilla, and coconut milk, it is a simple but highly delectable example of a Jamaican breakfast cuisine.

Not only is hominy corn porridge my favorite Jamaican porridge, but it is also one of the top three porridges eaten in Jamaica alongside Cornmeal Porridge and Peanut Porridge. This is no surprise as it is highly nutritious and tastes so good it keeps everyone coming back to this Jamaican porridge recipe.

Although hominy corn porridge may not always be available at Jamaican hotels it can be enjoyed when venturing out into the local area as it’s often available from Jamaican restaurants (cook shops) and from street vendors who will make a huge pot and sell it right through the day until sold out.

Hominy Corn porridge has a thick smooth texture that is studded with little pieces of chewy corn. The irresistible creamy, slightly corny flavor is perfectly married with the vanilla and sweetness from the coconut and condensed milk and the spiciness of the cinnamon and nutmeg.

Depending on who is preparing the hominy corn porridge you can expect to see cracked, or sometimes whole pieces of hominy corn in the porridge. As with most recipes, there are many variations on the cooking methods and final results, which include how much the pieces of corn are crushed and incorporated into the porridge.

Jamaican hominy corn porridge can be served hot or cold and is delicious topped with sliced or diced fruits, nuts, and a little nut butter. Or why not serve the traditional Jamaican way with a slice or two of buttered bread or some water crackers.

If you are having problems getting the perfect consistency of your Jamaican Hominy Corn Porridge follow these easy instructions for getting it back on track and ready to enjoy!

My Hominy Corn Porridge Is Too Thick?

If your hominy corn porridge becomes too thick you can always add some cold water or milk to loosen the porridge whilst stirring it on a low simmer. Continue stirring until the extra liquid is fully incorporated and if cooked through take it off the heat as it will re-thicken if left to dry out on the stove.

Remember than the more you mash the hominy corn kernels with the spoon when stirring, the further the porridge will naturally thicken.

My Hominy Corn Porridge Is Too Thin And Runny?

Some people crush the hominy corn with the back of a spoon on the inside of the pot to thicken the consistency of the porridge. This will naturally thicken the porridge without the need for additional ingredients.

Alternatively, you can add some tapioca starch, or flour as a thickener. Ensure you mix the thickening agent with a little coconut milk (or alternative) before you add it to the pot or it will go lumpy.

How Do I Get Rid Of Lumps In Hominy Corn Porridge?

By its very nature hominy corn porridge will have visible pieces of cracked corn within the dish. This is perfectly normal and is what gives this porridge its delicious thick and smooth but chewy texture.

If the lumps are caused by the thickening agent (tapioca starch/flour) you can attempt to crush the lumps on the side of the pot to fully incorporate them. Continue crushing and stirring until they have disappeared.

You can lessen the chance of getting lumps in your thickening agent by thoroughly premixing it with a little coconut milk (or alternative) in a separate vessel, before slowly adding it to the porridge pot whilst stirring until incorporated.

Can I Use A Pressure Cooker To Make Hominy Corn Porridge?

Yes, you can totally use a pressure cooker or one-pot type cooker to make hominy corn porridge as it reduces the cooking time to around 30 minutes (dependent on model) and prevents the need for pre-soaking the corn from the night before. This means you can make this porridge on the fly and still enjoy it before leaving out in the morning!

We have 4 Amazing Jamaican Hominy Corn Recipes for you to try that will suit all eating habits and lifestyles. Whether you want the authentic traditional, Vegan, or Gluten-Free version of this delicious recipe you will be sure to find something to tickle your tastebuds!

This recipe for Jamaican Hominy Corn Porridge is the creamiest version of this iconic breakfast option, with a mixture of coconut, evaporated, and condensed milk added to the pot!

It will evoke the senses with the aroma of the coconut, cinnamon, nutmeg, and vanilla with a rich, creamy, and smooth custard-like texture with little chewy pieces of corn.

If you want to experience the real deal Jamaican flavor then you have to try this recipe for Vegan Hominy Corn Porridge!

Creamy, chewy, spicy, and totally satisfying this is a recipe you will come back to time and time again as it’s so satisfying and delicious.

This recipe is also totally Gluten Free (GF) and can be enjoyed by those following a wheat-free lifestyle too.

This authentic version of Jamaican Hominy Corn Porridge utilizes cornmeal as the thickening agent, which is naturally gluten-free (GF) so it makes it ideal for anyone following a gluten and wheat-free lifestyle.

You won’t be missing out on any of the fun though as it still contains all the good stuff for that Jamaican flavor boost, such as coconut milk, cinnamon, nutmeg, and vanilla.

Check out this recipe for Gluten-Free Jamaican Hominy Corn Porridge and you won’t be disappointed!

This easy-to-follow video will give you visual instructions on how to master Jamaican Hominy Corn porridge, so you can enjoy this delicious breakfast dish with friends and family, or if you choose to keep it all to yourself we wouldn’t judge you!

If you are thinking about making Jamaican hominy corn porridge check out these FAQs and nutritional facts about who this recipe is ideal for and learn how you can substitute certain ingredients to make it suitable for all eating lifestyles.

What Is Jamaican Porridge Hominy Corn Made Of?

Hominy corn porridge is a traditional Jamaican porridge made from yellow or white hominy corn kernels, which can be cracked or whole (cracked hominy corn is recommended as it cooks must faster than whole hominy corn).

The hominy corn is boiled in coconut milk, with condensed milk, cinnamon, nutmeg, vanilla, salt, and a thickener, such as tapioca starch or flour. Some people prefer to crush the hominy corn kernels to thicken the porridge rather than adding another ingredient to do the task.

Is Hominy And Corn The Same Thing?

There are many types of corn and hominy corn comes from a variety of field corn, known as yellow or white maize.

Hominy corn is much more nutritious than other corn-derived products as it goes through a process known as nixtamalization, which removes the hull and germ, by soaking them in an alkali solution of slacked lime, or lye making the corn easier to grind and cook with.

This process helps the corn release more of its nutrients, such as niacin, or vitamin B3, as it gets separated from the corn and can be digested more easily.

Hominy corn porridge is traditionally made with a mix of coconut water, milk, and/or condensed milk, which makes it suitable for Vegetarians but not Vegans as these products contain cow’s milk.

Jamaican Hominy Corn porridge is considered to be acid forming.

Jamaican Hominy Corn porridge is naturally gluten and wheat free as it is made from dried corn. It can be enjoyed by persons with celiac dieseases too.

Check what has been used as a thickener in the porridge as some people use wheat flour.

Hominy corn is free from cholestrol, low in fat and sugar and high in fiber and various minerals that are important for the health of the body.

However, the traditional recipe for Jamaican hominy corn porridge is loaded with sugar and fat from the milk, condensed milk and / or, sugar which can cause a spike in sugar levels when consumed.

If you are watching your blood pressure and want to enjoy this recipe swap the cow’s milk / condensed milk, for almond (or other plant-based) milk and substitute any added sugar with maple, agarve syrup, honey or any other sweetner that has been recommended by your doctor.

Why not try adding more cinnamon to the recipe instead, which is said to be a ‘false’ sweetener.

If you want to try making a healthier version of this dish check out the Vegan Jamaican Hominy Corn Porridge Recipe above, but omit the plant-based condensed milk…

You can eat Jamaican Hominy Corn Porridge if you are a diabetic providing you don’t add condensed milk and sugar which are loaded with sugar and fat and will cause a spike.

If you want to enjoy Jamaican hominy corn porridge swap the cow’s milk / condensed milk, for almond (or other plant-based) milk, and don’t add sugar to the porridge if you are diabetic. Why not try adding more cinnamon to the recipe instead, which is said to be a ‘false’ sweetener.

Hominy corn porridge is not recommended for babies under one year as it may pose a choking hazard due to the pieces of chewy corn that are studded throughout the porridge.

However, we would recommend Jamaican cornmeal porridge as an altenative. As it is the number one first solid food given to babies at the weaning stage in Jamaica, as it is easily digestible and full of nutrients, vitamins, and minerals.

The Benefits of Hominy Corn Porridge

Hominy Corn porridge not only tastes delicious it has many health-boosting properties that make waiting for the soaking time extra worthwhile!

Hominy Corn contains many essential minerals and a few vitamins that the body needs to efficiently function. The yellow variety which is usually used in Jamaican hominy cron porridge recipes has slightly more health benefits than the white variety.

Hominy corn is a good source of omega-6 fatty acids, Vitamin A, B2 and B5, and minerals incuding, Iron, Magnesium, Manganese, Phosphorus, Selenium, Zinc.

Is Hominy Corn A Source Of Fiber?

Hominy corn has 4g of fiber per cup which fills you up and maintains good digestive health. Hominy corn lowers cholesterol and and regulates the level of blood sugar which control diabetes and manages weight.

Is Hominy Corn A Source Of Iron?

Hominy Corn is rich in the mineral Iron, and has around 7% of the RDA per cup seving, which is needed for the body to produce red blood cells. Therefore, eating hominy corn porridge on a regular basis can help lessen the risk of anemia and high blood pressure.

Is Hominy Corn A Source Of Carbohydrates?

Hominy Corn porridge is a great source of carbohydrates, boasting around 24g per cup serving. Which gives the body slow-burning fuel for energy and creates a feeling of fullness, which can help curb the mid-morning munchies!

Is Hominy Corn A Source of Protein?

Hominy corn is not rich in protein as it only has around 4g of protein per cup serving. However, it is low and fat and high in essential minerals and carbohydrates which make it the most nutritious form of corn.