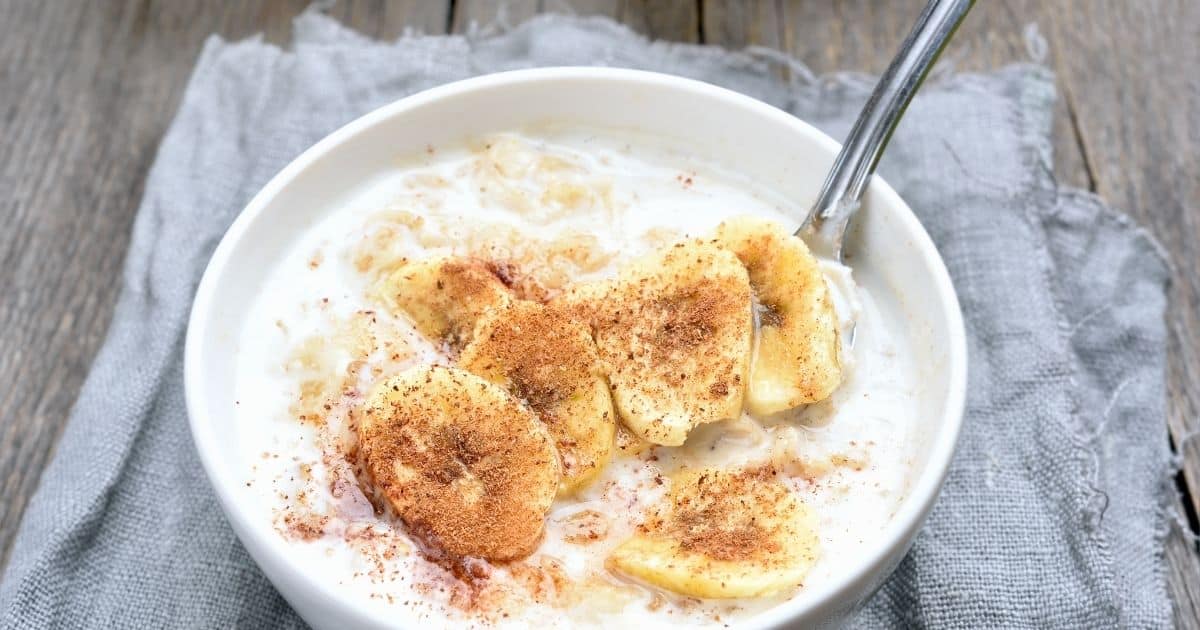 Jamaican oats porridge is usually made as a type of cold drink that is so popular in Jamaica it has been immortalized in song lyrics from some of the island’s most famous artists! Oats porridge is also enjoyed as a hot breakfast dish too, with Jamaican Foska’s oats being the top brand for its delicious smooth and creamy taste and texture.

Easily made with simple ingredients, the addition of coconut milk, condensed milk, peanuts, cinnamon, nutmeg, and vanilla ramp up the volume and give that authentic lip-smacking Jamaican flavor to this must-try dish.

Like cornmeal porridge, oats porridge has a reputation for giving you strength and stamina, especially if peanuts are added to the recipe! It also is effective in filling hungry bellies and is a favorite for the young and elderly as a delicious and familiar easily digestible nutritious meal.

Jamaican oats porridge is traditionally served with a slice or two of hard dough bread or some water crackers. Nowadays it is popular to top your oats porridge with fruits, sliced nuts, and drizzles of nut butter.

Although Oats Porridge may not always be available at Jamaican hotels it can be enjoyed when venturing out into the local area as it’s often available from Jamaican restaurants (cook shops) and from street vendors who will make a huge pot and sell it right through the day until sold out.

Oats are commonly served in two ways in Jamaica, firstly as a cold drink and secondly as a cooked porridge. Dependent on the method of preparing the oats will have a different texture and mouth feel, although the ingredients are more or less the same.

Cooked oats porridge has a texture that is reminiscent of thick custard, but results may be smoother or coarser depending on the brand of oats used. The flavor of oats porridge is creamy and taken to the next level with the vanilla, coconut/condensed milk, cinnamon, and nutmeg, that are so popular in Jamaican recipes.

Cold Jamaican oats drinks are commonly made as a smoothie replacement, with the addtion of lots of milk, with a splash of vanilla and nutmeg, cinnamon, and commonly peanuts and either Dragon Stout or Guinness.

Jamaican oats porridge can be served hot or cold and is delicious topped with sliced or diced fruits, nuts, and a little nut butter. Or why not serve the traditional Jamaican way with a slice or two of buttered bread.

If you are having problems getting the perfect consistency of your Jamaican Oats Porridge follow these easy instructions for getting it back on track and on the table ready to enjoy!

My Oats Porridge Is Too Thick?

If your oats’ porridge becomes too thick you can always add some cold water or milk whilst stirring to loosen the porridge whilst stirring on a low simmer. Continue stirring until the extra liquid is fully incorporated and if cooked through take it off the heat as it will re-thicken if left to dry out on the stove.

My Oats Porridge Is Too Runny and Thin?

If your oats porridge is too thin you can always add some blended oats (oatmeal) to the porridge whilst stirring it on a low simmer. Continue stirring until the oats are fully incorporated and cooked through, then take off the heat.

How Do I Get Rid Of Lumps In Oats Porridge?

If you have any lumps in your oats porridge you can try to disperse them by crushing them with the back of a spoon on the inside of the pot. Once crushed stir the oats porridge thoroughly until they are fully incorporated.

Add a little milk or water to loosen the oats porridge if necessary.

We have 4 Amazing Jamaican Oats Recipes for you to try that will suit all eating habits and lifestyles. Whether you want the authentic traditional, Vegan or healthy version of this delicious recipe you will be sure to find something to tickle your tastebuds!

It will evoke the senses with the aroma of the coconut and spices and the taste is rich, and creamy.

Simply delicious you have to try this delicious recipe for traditional Jamaican oats porridge.

This recipe for a Vegan Jamaican Oats Porridge is a must-try!

Creamy, spicy, and totally moreish you’ll be adding this easy recipe to your weekly breakfast list after just one try!

This recipe is also totally Gluten Free (GF) and can be enjoyed by those following a wheat-free lifestyle too.

Simply delicious you have to try this delicious recipe for Vegan Jamaican oats porridge.

Jamaican Oats Porridge can still be enjoyed with you are following low fat and/or low sugar lifestyle.

This version of this iconic recipe is much healthier than the traditional version as it only uses 1/4 cup of condensed milk with no added suagr, whilst still having a delicious flavor and health benefits.

Check out this recipe for Healthy Jamaican Oats Porridge and you won’t be disappointed!

This recipe for Jamaican oats Porridge is made autentically Jamaican with the addition of traditonal Jamaican ingredietns and is super quik and easy to follow.

If you are looking for a recipe with measurements, ingredients, and a full method, try one of the other tutorials we have featured above, as this video is more for your viewing pleasure and fun!

If you are thinking about making Jamaican oats porridge check out these FAQs and nutritional facts about who this recipe is ideal for and learn how you can substitute certain ingredients to make it suitable for all eating lifestyles.

Oats porridge is traditionally made with a mix of coconut water, milk, and/or condensed milk, which makes it suitable for Vegetarians but not Vegans as these products contain cow’s milk.

Is Oats Porridge Alkaline or Acidic?

Jamaican Oats porridge is considered to be highly Acidic and is not recommended for persons on an alkaline diet. However, as oats porridge is loaded with important vitamins and minerals for bone, heat and blood health, it is recommended to eat oats porridge by alkalizing it, which can be easily acheived by adding mashed/blended banana or plantain to the recipe.

Pure oats are naturally gluten and wheat-free however, they contain a protein that is similar to gluten. Additionally check the label as they are commonly processed on machines that also prep other grains that may not be gluten-free, such as flour or wheat products.

Eating pure whole oats on a regular basis has several benefts to heart health as oats contain a unique group of antioxidants that are believed to protect against heart disease.

Old fashoned and steel cut oats are the best variety of oats to choose as they are less processed and contain high levels of soluble fiber, which has been shown to reduce cholesterol levels.

If you are watching your blood pressure and want to enjoy this recipe swap the cow’s milk / condensed milk, for almond (or other plant-based) milk and go easy on the amount of sugar that you add to the cornmeal porridge. Why not try adding more cinnamon to the recipe instead, which is said to be a ‘false’ sweetener.

Minimally processed oats contain high levels of soluable fiber and beneficial compounds that assist in the management of diabetes. Plus it has a low glycemic index (GI) score, which means it doesn’t create blood sugar spikes which are determental to persons managing diabetes.

If you want to enjoy Jamaican oats porridge swap the cow’s milk / condensed milk, for almond (or other plant-based) milk and go easy on the amount of sugar that you add to the porridge if you are diabetic. Why not try adding more cinnamon to the recipe instead, which is said to be a ‘false’ sweetener.

It’s a big YES from us! It is very common for Oats Porridge to be offered to babies as a first solid food in Jamaica as it is easily digestible and full of nutrients, vitamins, and minerals. Foska’s Oats is the most beloved brand of oats in jamaica as it is very fine cut and creates a smooth and creamy hot porridge.

The Benefits of Oats Porridge

Oats porridge not only tastes delicious it has many health-boosting properties that make both the hot and cold versions a great breakfast option. Oats contains many essential minerals and vitamins that the body needs to efficiently function like Manganese, Phosphorus. Copper. Vitamin B1. Iron, Selenium, Magnesium, and Zinc.

Jamaican men believe that oats porridge gives the body strength, vitality and stamina (if you know what I mean!) and is often prepared as a cold drink with the addition of peanuts, Dragon Stout/Guinness and the usual Jamaican favorites condensed milk, cinnamon, nutmeg and vanilla.

Oats porridge is also popularly served to babies as a first solid food and to the elderly for its health-boosting properties and easy digestability.

Is Oats Porridge A Source Of Fiber?

With up to 11g of fiber per 100g serving, oats are great for digestion and for keeping everything moving in the bowels on a regular basis. They also contain starch which helps to feed the friendly bacteria in the gut which promotes good gut health overall.

Is Oats Porridge A Source Of Vitamins and Minerals?

Porridge oats are high in many vitamins and minerals, including: Manganese, Phosphorus. Copper. Vitamin B1. Iron, Selenium, Magnesium, Zinc.

Is Oats Porridge A Source Of Carbohydrates?

Oats porridge is a great source of carbohydrates which gives the body slow-burning fuel for energy and creates a feeling of fullness, which can help curb the mid-morning munchies!

Is Oats Porridge A Source of Protein?

At around 17-19% protein, oats porridge is unusually high in protein for a porridge that is made from a grain, this is partly because it contains a unique protein that is similar to legume protein.