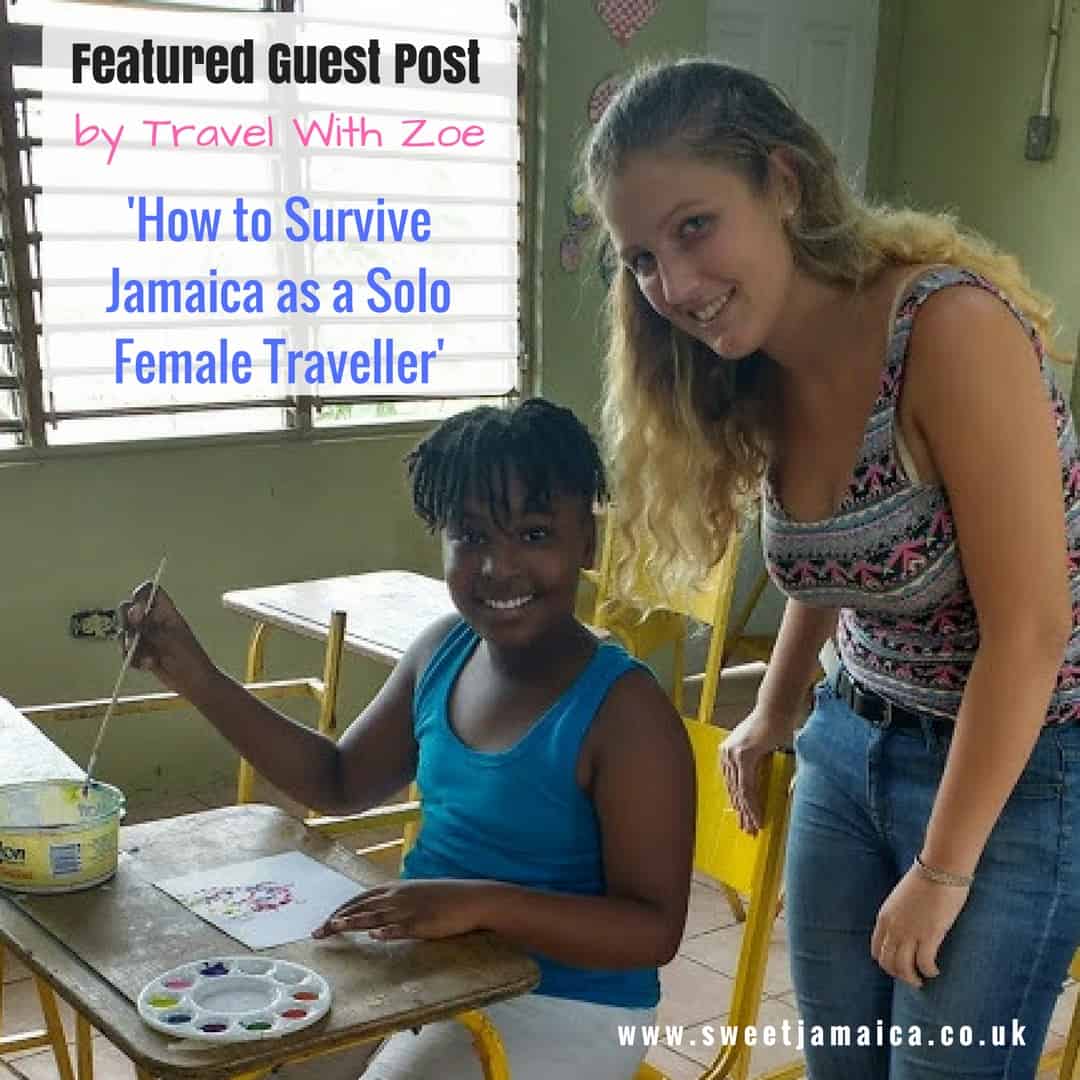 I stumbled upon the Instagram feed of a young British woman who is a languages graduate, a volunteer, an English as a foreign language teacher, a carnival lover, a vegan. AND, a successful serial solo traveller, to name a few of her talents and interests!

I admire the way she is forging her own path by travelling around the world experiencing different cultures, by working, volunteering and generally having a good time – mostly on solo adventures.

This got me thinking about all the travelling I have done in my life and how after moving to Jamaica, I have kind of stopped ticking places off my bucket list (I really must get back to that…).

It also brought home how much I love that feeling of ‘wonderment’ when you travel somewhere new and made me realise that I have become accustomed to the way of life in Jamaica with each passing year of living here.

I decided to reach out to the multi-faceted Zoe to ask her to write a guest post on Sweet Jamaica. As I thought it would be fun to share her take on the Jamaican experience.

Plus, I also asked Zoe to share some tips for visiting Jamaica as a solo female traveller and how to go about finding volunteering work in Jamaica.

by Travel With Zoe

I’m probably not the only girl who was told that planning to go travelling in Jamaica alone was a stupid idea.

A lot of my friends and family seemed to think I was going to get kidnapped (or worse), when most of them had never actually been there, so they were probably just basing their opinions from some out-dated films, videos, rumours or news articles.

Anyway, I’ve now travelled to Jamaica twice by myself, for a total of almost four months, and I’m still here to tell the tale!

I think about Jamaica almost every day and would absolutely love to be able to go back again some time.

I thought I’d share a few things that I think could be helpful for anyone planning to travel to Jamaica, especially as a solo female traveller.

The first thing is volunteering. There are a few backpacker hostels that offer ‘work exchanges’, meaning you can volunteer at the hostel bar or reception part-time in exchange for a free bed and sometimes food.

If you’re interested in this, check out websites such as Workaway or Worldpackers.

I volunteered for a few months in a hostel in Kingston, and it was really helpful for getting to know people because I ended up becoming friends with some of the staff and their families, so I had local people to hang out with who I knew I could trust.

It also gave me an insight into parts of the island I hadn’t visited, because guests who’d travelled around the island would often share their stories with me.

As well as hostel volunteering, there are a few local charitable organisations in Jamaica that welcome volunteers.

Unfortunately, it can be hard to find information about these online, but luckily I managed to find out about the Trench Town Reading Centre through a blog post.

I emailed them after having found their contact details on their website, and they told me they’re always open to volunteers, even if it’s only for a one-off visit, so I went along a few days later.

If you’re in Kingston and you like children, I would definitely recommend that you contact them and arrange a time to volunteer.

The kids are cute and friendly and it’s something worthwhile to do on your trip.

Again, this could help you learn more ‘inside’ information about the area and it could lead to some new friendships.

Aside from volunteering, something I found incredibly helpful in Jamaica was Google Maps! Surprising, right?

In Kingston, if you want to get from A to B, but you’re not sure how the public transport works, if you ask Google Maps for directions, it tells you which bus to take and where to take it from. (This only applies for the official government buses, not the coaster buses).

There’s nothing wrong with asking people for directions and transport advice on the street, but personally I felt a bit better having some background knowledge even if I ended up asking people too.

I also used Google Maps for learning some road names before going to new areas, so I would know I have to pass X, Y and Z road on the left or right before reaching the restaurant/museum/bar I was looking for.

This helped me to feel more confident as I was walking along by myself, and I could ask a stranger “X Road is just along here, right?”, rather than seeming completely lost and asking “excuse me, can you tell me how to get to the museum?”


Dealing with Sexual Advances as a Single Female Traveller in Jamaica

When you’re walking along by yourself, don’t be surprised if you’re bombarded with more compliments and nicknames than you’ve ever had before in your life!

Guys on the street normally called me things like “whitey”, “pretty girl” and “sexy girl”, but sometimes it would just be something like “blue blouse” if I was wearing a blue top.

In my culture it’s not normal to speak to people like that, and it can be a bit surprising at first when you’re in Jamaica, but just remember they give nicknames to everyone and it’s completely normal.

I ended up having some very funny and interesting conversations with people who came to speak to me on the street, and sometimes it led to me eating at a nice restaurant I didn’t know about before, or hearing about a concert that I didn’t know was going to happen.


If you find that certain boys are too persistent, or you don’t have time to stop and talk, or you just don’t feel like having a conversation, don’t be afraid to tell them.

I often just said “I’m going to be late for work so I can’t stop now” (which wasn’t even a lie really because I was often on my way to volunteer at the hostel).

I know some girls who made up stories about their Jamaican boyfriend (who didn’t actually exist), and once they told the boys that their boyfriend was supposed to be meeting them in five minutes, that was often enough to end the conversation.

Jamaica is a beautiful place and I feel lucky to have experienced it, but as a solo female traveller, always remember the general tips for travelling, including not carrying much money, carrying money in two separate places (e.g. pocket and bra), not telling absolutely everyone where you’re staying, not walking around alone after dark if you can avoid it and listening to your instincts.


All the travellers I met in Jamaica were having a great time, so don’t let the rumours stop you. Book that flight, pack your backpack and get out there!

Take a coaster bus where music plays loud enough for a 1000 person venue, buy local fruits at the market, eat Jamaican food from a little wooden cook-shop with no name, learn some patois, swim under a waterfall, drink a Red Stripe, go to a live dancehall/reggae show, laugh and smile with Jamaican children, talk to an old Rasta man about the meaning of life, and so much more.

If you would like to learn more about Zoe’s experiences of world travel you can check out her website Travel With Zoe and her social media channels.

I have also included the links for the Volunteering Websites that Zoe mentioned in the post.

What is your experience of solo travel or volunteering?

Get More From Sweet Jamaica

Want to get updates on the move then follow us…

6 thoughts on “Travelling to Jamaica as a Solo Female”